One of the mysteries of car restoration is all the strange color tapes and hand written markings that can be found on the car. These were obviously important to the assembly line workers while the cars were going down the line but what do they mean? Some obviously identified the particular parts that were to be installed on the car while others were likely notations of work completed. I was recently cleaning the underside of our Spoiler II and found some evidence of the original markings.

I am no expert in this historical world of assembly line codes but I know many of you are. Starting today I am asking you to send us photos of the markings you have found on your car, where (in detail) they were located and what they mean, if you know. If you don’t know we will be asking you experts out there to tell us. All photos and translations will be posted on the web site for future reference.

Here is the first one. This one was provided by Wayne Perkins and is the marking on the body under the rear bumper of a 1969 Mercury Cyclone Cale Yarborough Spoiler II. 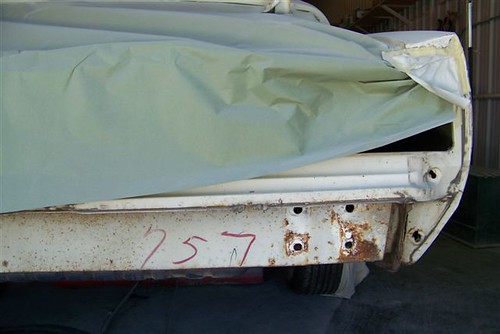 Neither Wayne or I could explain the “757” that he had found. However, Mike Schneider says : “Most assembly plants had sequencing numbers that have nothing to do with the eventual VIN of the car.  My Cale has “793″ crayon marking under the rear bumper.”

That is a good start to explaining these particular numbers but what exactly does the “sequencing number” tell us? Does this apply to all Cyclones? Just Spoiler II cars? Or?

Sends us photos of what you want explained and if you are real smart tell us what are markings and color dabs mean! Email to: rfleener@comcast.net

Here is an additional photo provided by Brian Abshier.

Brian states: “This is a pick of a number I found. It seems to match the rotation number on my build sheet. The pic is the rear splash shield in the Dan Gurney Spoiler II front fender well. This number also
appears on the passenger side floorboard. I couldn’t get a pic of this because its so nasty it wouldn’t come out. The car has been painted before so its not under the rear bumper but I am sure it was.

2015 Talladega Family Reunion: Who was there?