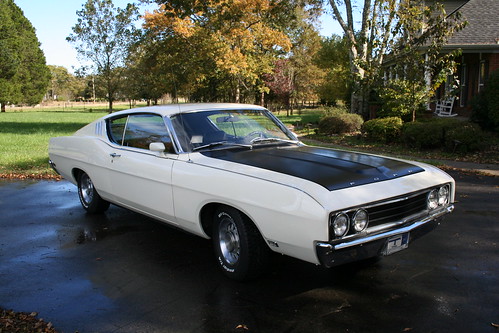 This 1969 Ford Talladega is a very special part of history. IT IS THE VERY FIRST FORD TALLADEGA OFF THE REGULAR PRODUCTION ASSEMBLY LINE. Talladegas were built along side regular Torinos and Fairlane so it is not VIN 000001 but is the first VIN in the regular Talladega production line. Of course this excludes prototypes and pilot cars never intended for sale to the general public. This car has an interesting history from what we have been able to piece together. Its existence today is completely due to the foresight of Michael Ratterree of SC who found this car virtually abandoned in a field. He intended on stealing the drive train for another project but realized after some research that was not the best route for this piece of history. Instead he lovingly and meticulously restored this car to a terrific show/driver quality. (He received a Best In Show at a meet in Darlington soon after its completion.)

The car originally came out of Baltimore Maryland and then found itself in the Darlington area being street raced. When Ratterree found it resting in a field it was in rough but very solid condition. The car currently shows approximately 38,800 original miles. The car is currently owned by your hosts on this site, Richard and Katrina Fleener of TN. We have the original block for the car in storage with a date correct 428 CJ under the hood for regular use. The car as you see it in the photos is not 100% as it came from the factory. We are not looking for every nut and bolt to be perfect but we do want the car to be a honest interpretation of what you would see on the street in stock form in 1969/70. We will therefore be making these changes over the next year or so and every one of them will be documented on our site.

-Feature Car in Art of the Muscle Car Motorbooks, 2009;

-Low miles and have original engine.

YOUR TALLADEGA IS REALLY A MUSTANG

When is a 1969 Ford Talladega a 428 CJ Mustang? When you ask Ford Motor Company to tell you more about your car! When we first got into Talladegas and wanted to gather more information one of the first two things we did of course was to search the internet and get a Marti Report. Next was to contact the Ford Research Department to see what information they could supply. We had three Talladegas. We had titles for all three, data plates for all three and a build sheet for one of them. So when we asked Ford for a 999 Report we were shocked when they responded by telling us that all three of our cars were Mustangs! When we placed a phone call to Ford they confirmed that our cars were Mustangs and not Talladegas. I don’t think they even knew what a Talladega was! I finally called in a respected Talladega expert, Rick Ochs, who in turn placed his own call to higher ups in Ford and got some new paper work started. This time I got three reports that confirmed correctly that we owned Talladegas. However, the documents continued to misrepresent what was included in the original Talladega option package. It just goes to show you how difficult it can be to obtain accurate information on how some of these very rare cars were originally built. In this case, even the factory didn’t have it right. (Copies of some of the original Ford letters are linked to this page. You will also be able to read more about this in our Blog.)

LITTLE HISTORY ON THE TALLADEGA

So, what do you think of when you hear the word “Talladega”? Obviously for fans of NASCAR the track in Alabama comes to mind. But for those that remember a certain factory modified 1969 Ford Torino, Talladega is a rare car that brings back exciting memories of the fabulous NASCAR aero-wars of the late 60s and early 70s on the Super Speedways. Trying to save face the Dodge Boys having been shown up by the 1968 Ford Fairlane fastback body style decided to the 1969 Dodge Charger needed to be little more aerodynamic. The result was the beautiful limited production 1969 Dodge Charger 500. With a flush mounted grill and reworked rear window it had less aero drag, which is a huge benefit on the super speedways. However, the Dodge Boys were so excited about their new discovery they weren’t too good about making it a surprise to the rest of the racing community. Hearing what the Dodge Boys were up to, Ford went back to the drawing boards with its 1969 Torino fastback. They brought in outside help from factory backed race shop Holman and Moody. These guys were wizards and came up with some aerodynamic tricks for the already slippery Ford and Mercury fastbacks. The specially built 1969 Ford Talladega and 1969 Mercury Spoiler II resulted. Among the changes, the most obvious included the longer front fenders that extended the snout, and had an angled front that connected the now flush mounted grill opening back into the hood area, with special bracing to support the now “drooped” nose. Holman and Moody also took 1969 Fairlane/Torino rear bumpers, and by sectioning them in the middle, made them tuck in closer to the body to catch less passing air and act as an old school spoiler for the front end. One critical change that many observers never notice is the modification to the rocker panels. They were re-rolled to provide a shallower rocker panel. To determine how low a car could be for the race track inspection process NASCAR measured the rocker panels from the bottom edge. Due to the re-rolled rocker panels these cars could now sit 1″ closer to the track. The cars now had a lower center of gravity that aided in better cornering. Talladegas and Spoiler IIs do not have identical body panels. Along with the obvious differences between a stock Cyclone and Torino the aero cars had completely different front end extensions. They do share the same grill and bumper however the sheet metal is different. In fact the Spoiler II was reported to be as much as 5 mph faster on the Super Speedways than the Ford. Since Ford wanted to win the NASCAR Manufactures Championship with a Ford not a Mercury and the Ford was still faster than a Dodge the factory put most of its drivers in Fords and left only 2 Mercury Spoiler IIs on the track. In order to comply with NASCAR rules, a minimum of 500 of these specially modified Talladegas and Spoiler IIs had to be produced and available to the general public. In January and February of 1969 Ford used its Atlanta plant to produce between 740 and 750 cars. Production cars were available in three colors; Royal Maroon, Wimbledon White and Presidential Blue. There were Pilot and Prototype cars of different colors. Maroon and blue cars received white pinstripes that ran along the tops of the fenders, doors and quarter panels, while the white cars received a black stripe. The interiors were all black vinyl, with cloth bench seats, no tach or clock, and just an AM radio. Talladegas were given special “T” plates on the doors just above the handles, a “T” in a circle on the rear, and “Talladega” nameplates inside on the door panels. All Talladegas received the 428 cubic inch Cobra Jet with a 10.5:1 compression ratio rated at 335hp, backed by a C6 automatic transmission. Staggered rear shocks were also used, along with a non-posi 3.25:1 rear end. Talladegas are the only automatic equipped Torinos to receive the Drag Pac staggered shocks.

Ford won the Manufactures Cup in 1969, and David Pearson won the season championship and Richard Petty finished second both driving a Talladega in 1969. Talladegas finished first, second, third and fourth in the Championship points that year! Also, Richard Petty won his 100th race behind the wheel of his blue Talladega It was the only year that Petty would drive a Ford.

In November of 2007 Ford thought this Talladega was a Mustang Cobra!

By December, with help, they realized they did make a Talladgea in 1969 and this car is one! They did this same thing on two other Talladegas we own.

However, they still didn’t get it 100% correct. In Ford advertising of the time they said the Talladega option included hood pins. This document also says our car has hood pins. It doesn’t and never did, I don’t know of any that came from the factory with hood pins other than some of the prototypes.