Unfortunately, due to recent unforeseen circumstances Michael Troell and the Knudsen Yellow Talladega will regrettably be unable to attend the Keeneland Concours d’Elegance this year.

Time is running out. In just a little over a month from now we will be gathering in Lexington, KY for the 2014 Talladega Family Reunion with invited cars at the Keeneland Concours d’Elegance. Today we will tell you about two more cars that will be there.

First off is the Bill France Signature car owned by Mike Teske.
This is a very unique car. It is one of the 9 Ford Talladega prototypes. These cars were built as Torino Cobras. This car was built without a data plate on the driver’s door. Most of the prototypes were not intended for delivery to the public. However, this one was given to NASCAR Bill France by Ford for use at Daytona Speed Weeks in 1969.

It was placed in the paddocks during Speed Weeks and all of the drivers from the Daytona 500, 24 Hours of Daytona and the Motorcycle races in 1969 signed the car! 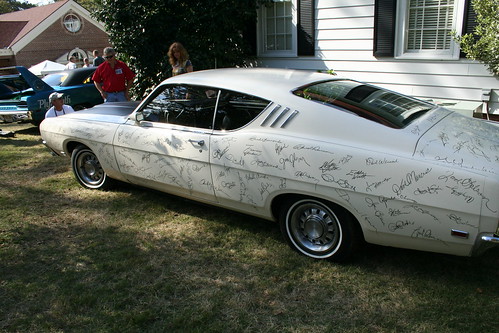 The car was titled in the name of International Speedway Corporation and driven by Mr. France and his son for many years. From there the car resided in the archives of the Talladega Motor Speedway Museum until 1999 when is was released for restoration.

The next car to attend is the Bunkie Knudsen Talladega.

I don’t know about you but I never get tired of seeing new photos of Michael Troell’s Yellow Bunkie Knudsen Talladega. This car was a very special build by Ford for its then President Bunkie Knudsen. It has a lot of one of a kind options and features not seen on other Talladegas. It has been fully restored and will sure to draw plenty of attention at the show.

Unfortunately, due to recent unforeseen circumstances Michael Troell and the Knudsen Yellow Talladega will regrettably be unable to attend the Keeneland Concours d’Elegance this year.