This ad was just (April 2015) placed on Hemmings for the sale of the Dr. John Craft restored Cale Yarborough car. If I had an extra $125,000 this would be in my garage! 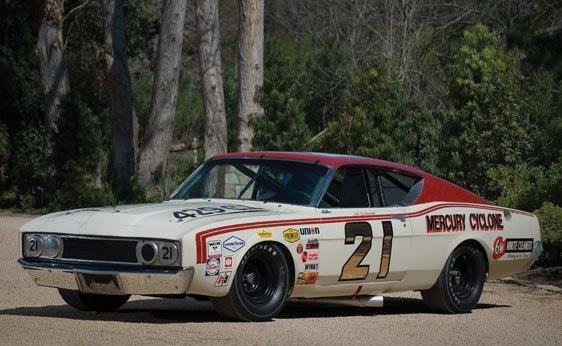 The Cyclone Spoiler II, developed along with the Torino Talladega was one of Ford’s “Winged Warriors” from ’69. In racing trim, the Spoiler II was actually slightly faster than its Talladega stablemate. In the hands of NASCAR driving legends including Cale Yarborough and Lee Roy Yarbrough, the Cyclone Spoiler II took four victories during a particularly hard-fought 1969 racing season, while David Pearson grabbed his fourth NASCAR championship with the Torino Talladega variant. While NASCAR mandated 500 street versions to homologate the cars for competition, Mercury records indicate that 285 Cale Yarborough-edition Spoiler IIs and 218 Dan Gurney-edition cars were produced with just 134 known to exist today. In fact, just one of the three original Cyclone Spoiler II racing cars is known to remain today.

This car is based on an original race car built in the early 70’s by Tom “Tiger” Pistone. In the mid 90’s John Craft, a noted NASCAR historian found the car in a Tennessee junkyard and restored it to Cale Yarborough’s / Wood Brothers specifications, using many Holman & Moody components.

A period-style NASCAR-specification Boss 429 racing engine powers the Cyclone, closely replicating the engine used by Cale Yarborough to win the 1969 Atlanta 500. A correct and very rare spider-type intake manifold was located and a pair of headers that were originally used by Smokey Yunick for dyno-testing purposes handles the exhaust. Scott Newbury of Orlando’s Powered By Ford machined the engine and when it was assembled, dynamometer testing confirmed peak output figures reaching 604 horsepower and 527 pound-feet of torque. Power is handled by a stout, race-prepared and period-style Ford Toploader four-speed manual transmission, while a set of New Old Stock Goodyear Blue Streak racing tires provide the rolling stock for this recreated superspeedway contender.

Featured in Modified Mustangs and Fords magazine, this Cyclone Spoiler II is representative of the NASCAR “Aero Warriors” of the late 1960s. With its painstaking restoration under the expert direction of Dr. John Craft, this great example of America’s rich NASCAR racing history is ready for continued display, or as a formidable entry to the growing number of vintage racing events nationwide including the Historic Grand National Stock Car Group !

Dr. Cyclone is getting ready for the Reunion!